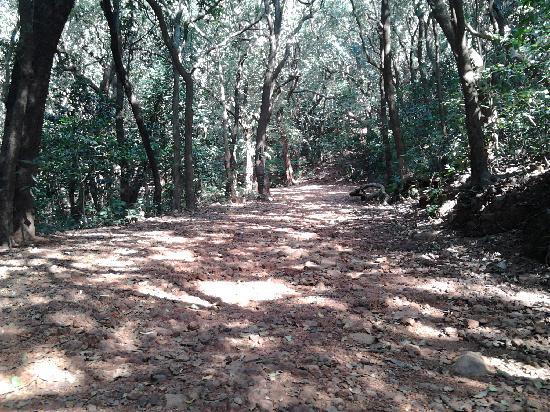 Image 3 of 3
*Railway ticket reservation (also return) is available at Churchgate / V .T. and on the neton Express trains, from V.T. – Neral + on the mini train, from Neral – Matheran.* From V.T. and Dadar local trains are also available.They are Karjat (S) and Khopoli (KH).

*Dasturi Car Park is 2.5 k.m., a 45 minute walk, from Hope Hall Hotel, in the center of Matheran. Follow the railway tracks, then from Matheran Railway Station follow the main road. We are located just before the Police Stn.

*Please get a coolie to carry your luggage, seat the sick / elderly in a hand pulled rickshaw, or ride a horse.

*If traveling by your own motor vehicle for your safety please park at Neral (Hotel Rahi car park), or ask a local driver to drive you up hill to Dasturi Car Park.

The MATHERAN plateau was discovered by an English man, Hugh Malet, Collector, Thane, in 1850. He started from the village of Chowk, ascended via One Tree Hill and descended from Rambhag Point. In 1875 Matheran had four hotels including Hope Hall Hotel.

The Matheran Steam Light Railway was completed by Sir Adamji Peerbhoy in 1907.

We are open throughout the year

Check out time 24 hours from check in

Located in the centre of Matheran

We do not pay the touts and commission agents